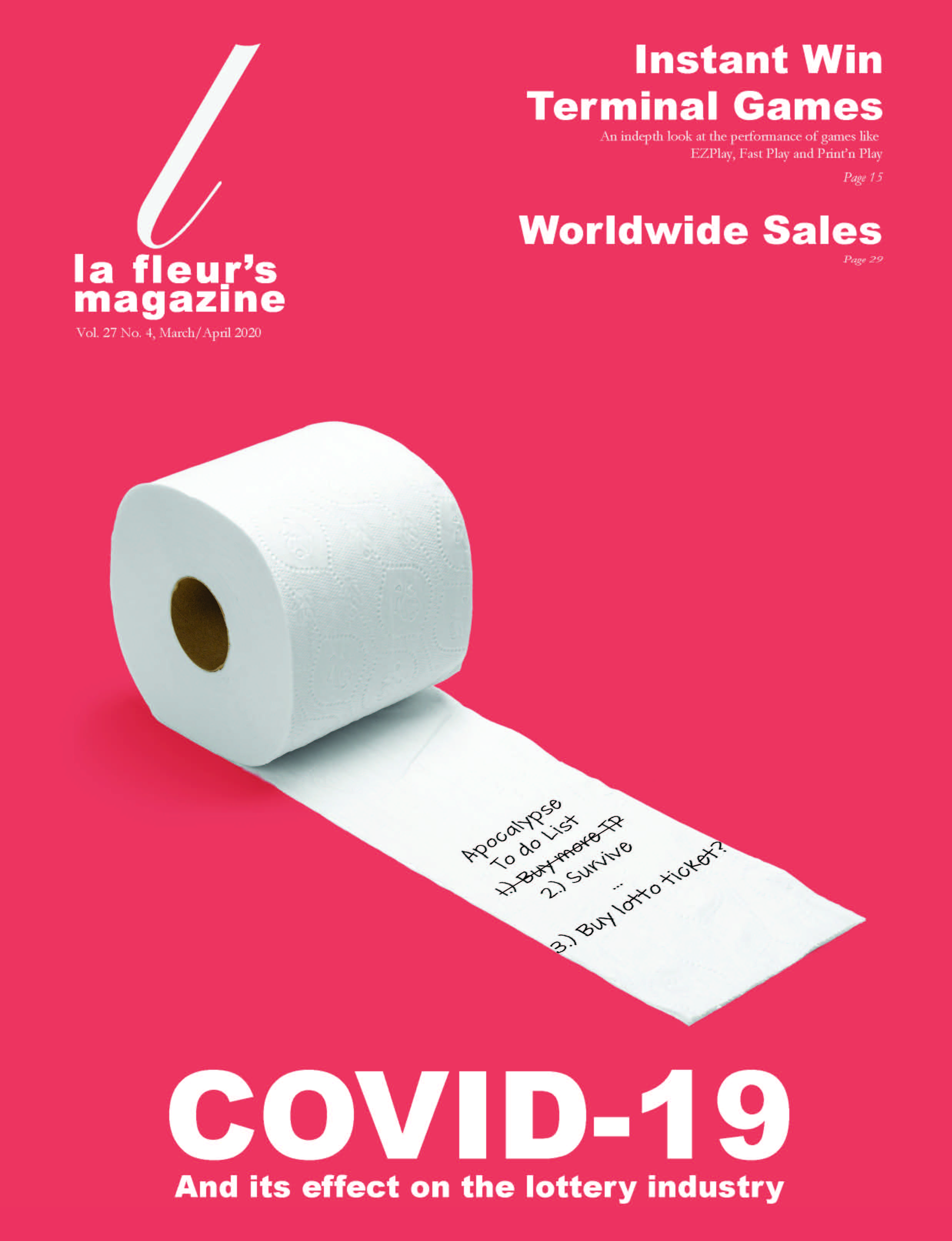 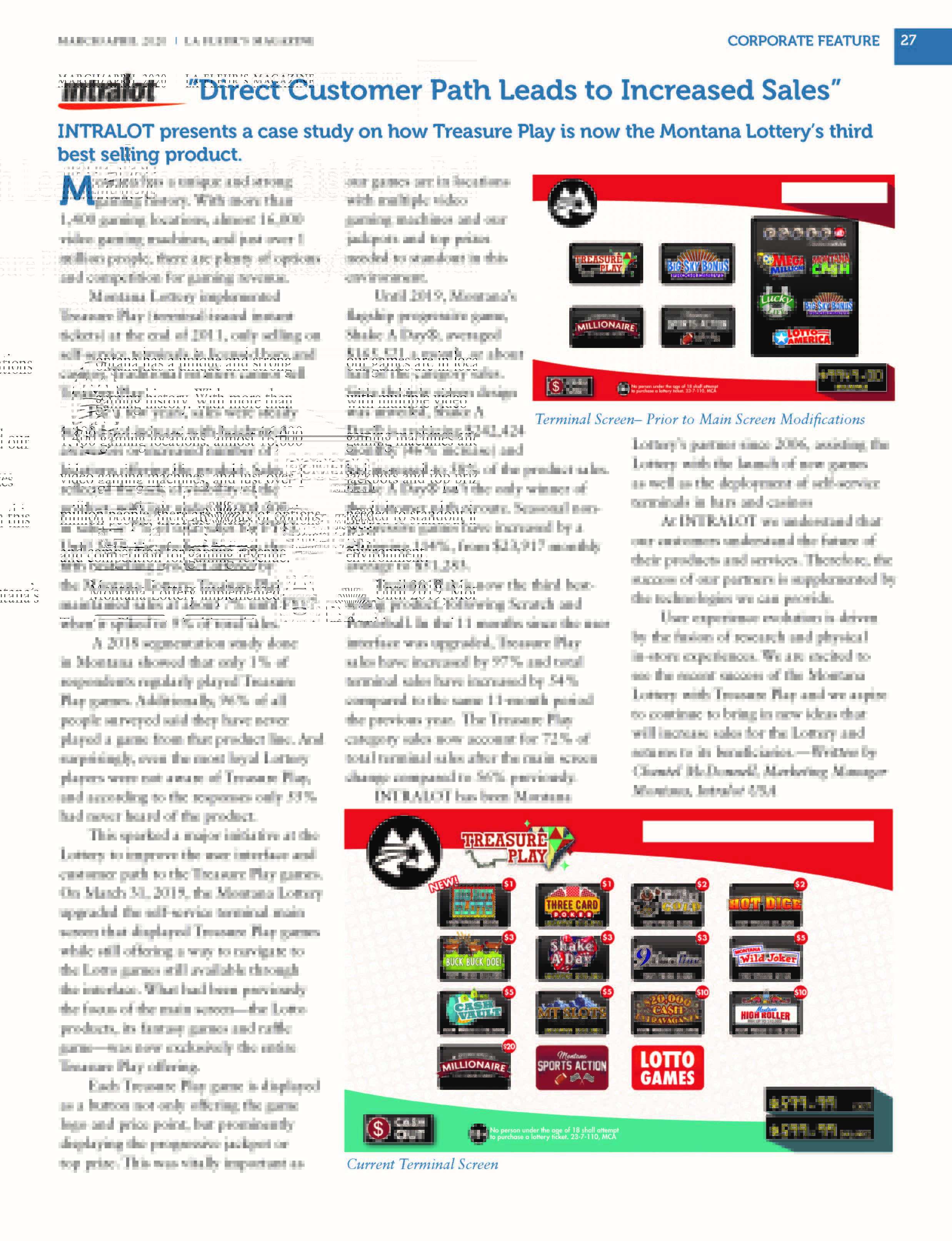 Montana has a unique and strong gaming history. With more than 1,400 gaming locations, almost 16,000 video gaming machines, and just over 1 million people, there are plenty of options and competition for gaming revenue. Montana Lottery implemented Treasure Play (terminal-issued instant tickets) at the end of 2011, only selling on self-service terminals in licensed bars and casinos. Traditional retailers cannot sell Treasure Play. For a few years, sales were steady but did not increase with heightened awareness or increased number of locations offering the product. Sales reflected the lack of visibility of the product, with just under $4,000,000 in sales, or seven percent of total sales for FY13. Until 2019, the product line was the fifth bestselling product offered by the Montana Lottery; Treasure Play maintained sales at about seven percent until FY17 when it spiked to nine percent of total sales.

A 2018 segmentation study done in Montana showed that only one percent of respondents regularly played Treasure Play games. Additionally, 96 percent of all people surveyed said they have never played a game from that product line. And surprisingly, even the most loyal Lottery players were not aware of Treasure Play, and according to the responses only 55 percent had never heard of the product.

This sparked a major initiative at the Lottery to improve the user interface and customer path to the Treasure Play games. On March 31, 2019, the Montana Lottery upgraded the self-service terminal main screen that displayed Treasure Play games while still offering a way to navigate to the Lotto games still available through the interface. What had been previously the focus of the main screen – the Lotto products, its fantasy games and raffle game – was now exclusively the entire Treasure Play offering.

Each Treasure Play game is displayed as a button not only offering the game logo and price point, but prominently displaying the progressive jackpot or top prize. This was vitally important as our games are in locations with multiple video gaming machines and our jackpots and top prizes needed to standout in this environment.

Until 2019, Montana’s flagship progressive game, Shake A Day®, averaged $165,521 a month, or about half of the category sales. Since the new screen design was unveiled, Shake A Day® is averaging $242,424 monthly (46 percent increase) and has increased to 58 percent of the product sales. Shake A Day® isn’t the only winner of the customer path reroute. Seasonal non-progressive games have increased by a whopping 114 percent, from $23,917 monthly average to $51,283. Treasure Play is now the third best-selling product, following Scratch and Powerball. In the 11 months since the user interface was upgraded, Treasure Play sales have increased by 97% and total terminal sales have increased by 54% compared to the same 11-month period the previous year. The Treasure Play category sales now account for 72% of total terminal sales after the main screen change compared to 56% previously.

INTRALOT has been Montana Lottery’s partner since 2006, assisting the Lottery with the launch of new games as well as the deployment of self-service terminals in bars and casinos. At INTRALOT we understand that our customers anticipate the future of their products and services. Therefore, the success of our partners is supplemented by the technologies we can provide. User experience evolution is driven by the fusion of research and physical in-store experiences. We are excited to see the recent success of the Montana Lottery with Treasure Play and we aspire to continue to bring in new ideas that will increase sales for the Lottery and returns to its beneficiaries.