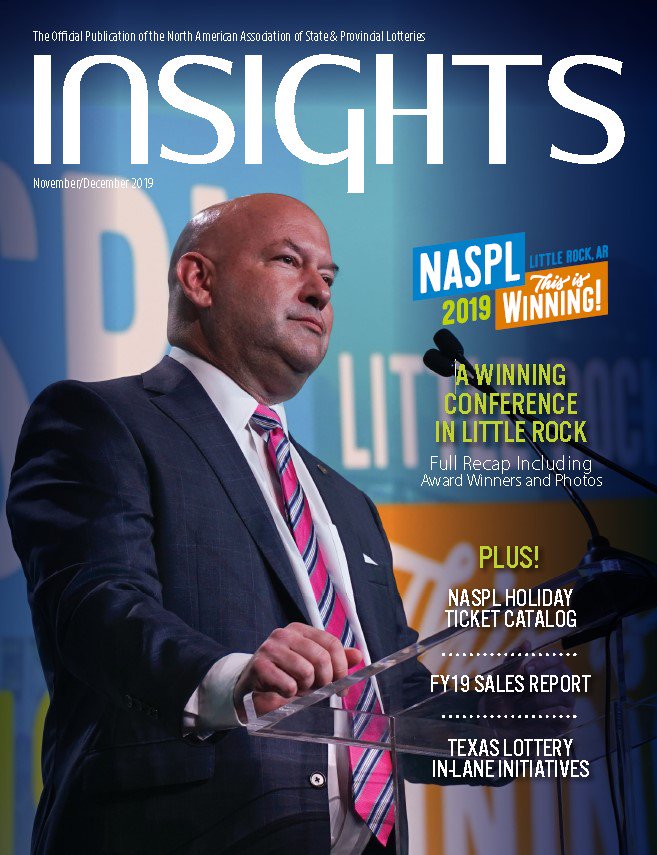 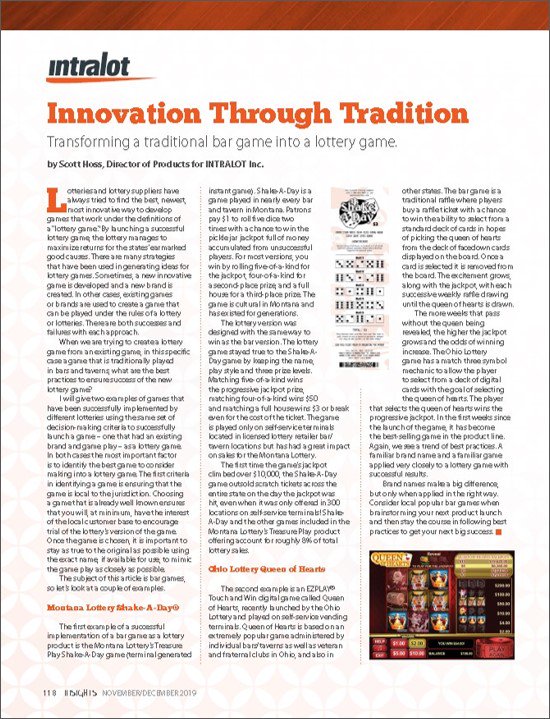 Transforming a traditional bar game into a lottery game

by Scott Hoss, Director of Products for INTRALOT Inc.

Lotteries and lottery suppliers have always tried to find the best, newest, most innovative way to develop games that work under the definitions of a “lottery game”. By launching a successful lottery game the lottery manages to maximize returns for the states’ earmarked good causes. There are many strategies that have been used in generating ideas for lottery games. Sometimes, a new innovative game is developed and a new brand is created. In other cases, existing games or brands are used to create a game that can be played under the rules of a lottery or lotteries. There are both successes and failures with each approach.

When we are trying to create a lottery game from an existing game, in this specific case a game that is traditionally played in bars and taverns, what are the best practices to ensure success of the new lottery game?

I will give two examples of games that have been successfully implemented by different lotteries using the same set of decision-making criteria to successfully launch a game – one that had an existing brand and game play - as a lottery game. In both cases the most important factor was to identify the best game to consider making into a Lottery game. The first criteria in identifying a game is ensuring that the game was local to the jurisdiction. Choosing a game that is already well known ensures that you will at minimum, have the interest of the local customer base to encourage trial of the lottery’s version of the game. Once the game is chosen, it is important to stay as true to the original as possible using the exact name, if available for use, to mimic the game play as closely as possible.

The subject of this article is bar games, so let’s look at a couple of examples.

Montana Lottery “Shake-A-Day®”
The first example of a successful implementation of a bar game as a lottery product is the Montana Lottery’s Treasure Play Shake-A-Day game (terminal generated instant game). Shake-A-Day is a game played in nearly every bar and tavern in Montana. Patrons pay $1 to roll five dice two times with a chance to win the pickle jar jackpot full of money accumulated from unsuccessful players.  For most versions, you win by rolling five-of-a-kind for the jackpot, four-of-a-kind for a second-place prize, and a full-house for a third-place prize. The game is cultural in Montana and has existed for generations.

The lottery version was designed with the same way to win as the bar version.   The lottery game stayed true to the Shake-A-Day game by keeping the name, play style and three prize levels. Matching five-of-a-kind wins the progressive jackpot prize, matching four-of-a-kind wins $50 and matching a full house wins $3 or break even for the cost of the ticket. The game is played only on self-service terminals located in licensed lottery retailer bar/tavern locations but has had a great impact on sales for the Montana Lottery. The first time the game’s jackpot climbed over $10,000, the Shake-A-Day game outsold scratch tickets across the entire state on the day the jackpot was hit, even when it was only offered in 300 locations on self-service terminals! Shake-A-Day and the other games included in The Montana Lottery’s Treasure Play product offering account for roughly 8% of total lottery sales.

Ohio Lottery Queen of Hearts
The second example is an EZPLAY® Touch and Win digital game called Queen of Hearts, recently launched from the Ohio Lottery played on self-service vending terminals. Queen of Hearts is based on an extremely popular game administered by individual bars/taverns as well as veteran and fraternal clubs in Ohio, and also in other states. The bar game is a traditional raffle where players buy a raffle ticket with a chance to win the ability to select from a standard deck of cards in hopes of picking the queen of hearts from the deck of facedown cards displayed on the board. Once a card is selected it is removed from the board. The excitement grows, along with the jackpot, with each successive weekly raffle drawing until the queen of hearts is drawn. The more weeks that pass without the queen being revealed, the higher the jackpot grows and the odds of winning increase. The Ohio Lottery game has a match three symbol mechanic to allow the player to select from a deck of digital cards with the goal of selecting the queen of hearts. The player that selects the queen of hearts wins the progressive jackpot. In the first weeks since the launch of the game it has become the best-selling game in the product line.  Again, we see a trend of best practices. A familiar brand name and a familiar game applied very closely to a Lottery game with successful results.

Brand names make a big difference, but only when applied in the right way.  Consider local popular bar games when brainstorming your next product launch and then stay the course in following best practices to get your next big success.