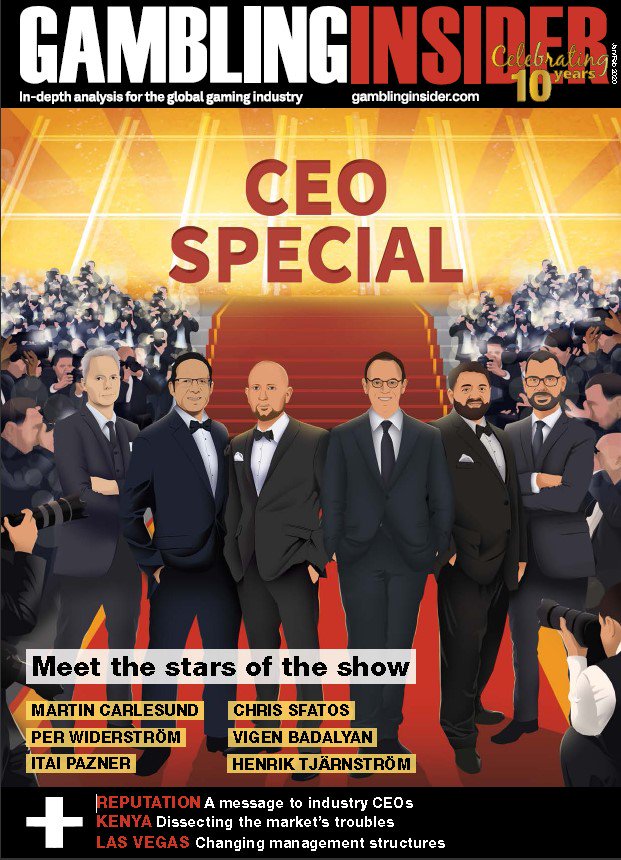 
Intralot Group Deputy CEO Chris Sfatos speaks with Owain Flanders about his long relationship with the company and how he has found the first year in his new role.

If you had to sum up Chris Sfatos in one word, it would be dedicated. He has devoted his entire career to the Intracom/Intralot group, first offering advice on international expansion and now, as Group Deputy CEO of Intralot, he is responsible for strategy, finance and HR. For more than 23 years, Sfatos has stood as one of the sturdiest pillars in the group’s foundations; helping the company grow from humble Greek beginnings in the 1990s to becoming an internationally-known company, acting as both operator and supplier in 47 jurisdictions across the world.

He conveys a calm and collected manner as we speak about his experiences in the industry, and presumably it is this composure that has helped him progress towards his current position, dealing with any difficulties the sector throws at him along the way. Sfatos has developed spades of industry knowledge, but he insists it is a Harvard University education in science that has equipped him with some of the most important tools in his possession.

While growing up in Greece, Sfatos first found inspiration in his parents, and then in his various teachers, as he developed an interest in a wide range of academic subjects, from arts to humanities and maths. Unsurprisingly, with such a thirst for knowledge, Sfatos chose to continue his studies with a PhD course in Chemistry and Physics at Harvard, and he believes this period of study played a significant role in the development of his analytical mind.

Speaking with Gambling Insider, he says: “Those years  are formative years in somebody’s life, because of the number of things that shape your personality when you’re young. Then there are things that happen during your life that shape your brain, the way you think, and the analytical framework. I was very fortunate to have very good analytical studies which allowed me to create an analytical frame of thinking, both quantitative and conceptual. I think because of this I was always focused and trying to see the big picture by aligning all the details.”

After his Harvard years, Sfatos left his beloved world of academia and transitioned into the business sector by working firstly for non-profit organisations, and then for profit organisations, working in risk management, international relations and corporate affairs. In this sense, he has always held a desire to be part of an international story; something he says made his current company’s desire for expansion so appealing.

There are things that happen during your life that shape your brain, the way you think, and the analytical framework. I was very fortunate to have very good analytical studies which allowed me to create an analytical frame of thinking

Sfatos began his relationship with Intralot through its original parent company Intracom - a technology group producing everything from telecoms technologies to software for the public sector. It was Intracom’s Greek headquarters along with an ambition for global dominance that first attracted Sfatos, two aspects that he believes “form the DNA of the company.” There, he helped distribute the group’s technologies across the globe, carving out a name for Intracom in Greece, across southwestern Europe and then further afield.

In 1992, Intralot was established as a gaming technology spin-off of Intracom, and Sfatos explains how it felt logical to join this company later. He says: “For me, it was kind of natural, evolving from one position to the other, being an agent of both change and continuity wherever I participated. I am very grateful to the owner and founder of the group for trusting me for so many years.”

In 2016, Sfatos became Group Director of Corporate Affairs before progressing to his current role as Deputy CEO, making him responsible for strategy, finance and HR. Although he advised the Intracom family for many years on international issues, Sfatos believes his three years as Group Director of Corporate Affairs at Intralot were particularly helpful in making him understand the organisation inside out. He says: “The work in corporate affairs and dealing with heavy issues, crisis management and the image of the company worldwide has given me access to many, many different parts of the company. I was fortunate to be able to advise the family for many years.”

Throughout his relationship with the gaming industry, Sfatos has experienced a complete shift in the gaming sector, from a solely land-based market pre-2000 to the emergence of the online space. Explaining the challenges and benefits of the two different markets, he says: “The land-based strictly regulated market can afford higher payouts and offers a more transparent, secure path to the players and to the broader public. On the other hand, the online channel is extremely competitive; volume and speed matter a lot and you are really competing on a global scale.”

The work in corporate affairs and dealing with heavy issues, crisis management and the image of the company worldwide has given me access to many, many different parts of the company. I was fortunate to be able to advise the family for many years."

Although these developments significantly altered the space in which Intralot operates, it seems to have only increased the company’s influence around the world. In 2018, Intralot handled approximately €17.5bn ($19.6bn) in wagers, with up to 285,000 of its proprietary terminals deployed worldwide, and generated total revenue of €870.8m for the year.

In the latest trading report available at the time of writing, Intralot saw a 7% drop in revenue year-on-year to €555.6m for the nine months to September 2019. However, with a number of new contracts sealed throughout the year across the globe, Sfatos is remaining focused on the evolving needs of the modern consumer and the release of a series of new products to accommodate those players.

He says: “We are in the beginning of launching the next generation of products - products that are adapted to serve the needs of the modern era and the modern consumer. This has had some impact on our results because of the size of the investment, because of the change of strategy from emerging markets to mature markets like the US, which are more capital-intensive, and also some changes in the market portfolio.”

Although it might not have been the easiest debut year for Sfatos in his role as Deputy CEO, he has seen a number of successes of which he can rightly be proud. To adjust for the investments made in product development, Intralot adopted a new structure creating operational efficiencies and cost savings. Last year also saw the launch of Intralot’s new lottery platform, Lotos X, with the company’s fellow Greek client OPAP.

Speaking of his first year in the hot seat, Sfatos says: “This has been a tremendously exciting period, but also a very stressful one for our teams, who have put a big effort in to make this successful migration for OPAP and to create new opportunities for our strategic client. For that reason, this has been a major accomplishment parallel to our cost review and the optimisation of our cost bases.”

It would be amiss to mention Intralot’s 2019 without considering its significant US expansion, with two new sports betting contracts signed and lottery deals extended. When the subject arises, Sfatos goes as far as to define it as the company’s “main story,” and it’s not difficult to see why. With the overturning of PASPA, Intralot has plans underway to increase its sports betting focus in the US, and partnerships with state lotteries in the District of Columbia, Montana, New Hampshire and New Mexico should give the operator the perfect platform to do just that.

Discussing this new sports betting focus, Sfatos explains he is well prepared for the slow process of regulation across the country, while always keeping one eye on expansion into further states. He says: “We think that in a regulated industry like ours, the regulatory framework becomes robust, predictable and well established. The evolution will be slow, so we are prepared for that, but we are very focused on the mass market. That will come from the regulated lottery business rather than the niche casino business.

“Our contracts with existing clients will be the first opportunities where we will launch our sports betting product in the US and it will be a good springboard for the rest of the opportunities that will mature in other, bigger states. Obviously bigger states are a more complex landscape when it comes to creating the full and stable regulatory framework, but we see that evolving within the next two or three years.”

One of Intralot’s most significant challenges of 2019 came in relation to its no-bid sports betting contract with the state lottery in DC, and before our conversation ends, it is of course important to ask Sfatos for his take on it. The deal was at the centre of criticism from a number of operators, including FanDuel and DraftKings, who both wrote editorials in the Washington Post condemning the agreement. Although the deal was initially blocked while a trial took place, it has since been permitted to continue after a Superior Court Judge lifted the preliminary injunction. Although that decision does not end the litigation, it allows the DC lottery to begin implementing sports betting in its retail sites and to start work on the introduction of mobile.

DC is a very political environment. I think it was more political tension that promoted this noise and challenge, but we stood up to this. We have generated $500m of state revenue in the last 10 years for the DC state lottery and it has created significant links of trust in us

When asked why he believes the deal garnered so much attention, Sfatos explains his belief that politics had its part to play. He says: “It is very typical for a state lottery to go on with their existing supplier and avoid the risk of migration to a new platform or a new supplier. The extension to include sports betting happened in parallel to the extension of the lottery contract for the next five years, so that is very natural.

“DC is a very political environment. I think it was more political tension that promoted this noise and challenge, but we stood up to this. We have generated $500m of state revenue in the last 10 years for the DC state lottery and it has created significant links of trust in us and our technologies.”

With lottery offerings in 31 jurisdictions across the globe and sports betting in 11, the international reach of the company is plain to see.

But for the future, Sfatos’ sights are firmly set on providing an optimum lottery product, while ensuring the maintenance of Intralot’s ideals and values.

“In five years' time, I think everybody will agree that we have the best lottery platform," he says. "That is our main ambition – to have the best lottery platform in the world. We are also committed to working with the World Lottery Association environment and everything that comes with it, including being committed to responsible gaming and offering entertainment and contributions to good causes. That is what really defines our approach.”