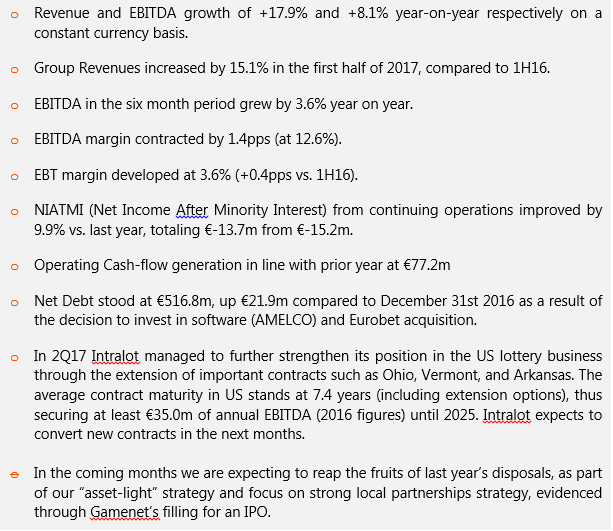 “Results for the first half of 2017, announced today, make it clear that this year represents a turning point for INTRALOT’s financial performance. Continued double digit revenue growth and profitability improvements are directly linked to reforms implemented in the previous year and more specifically to our M&A and partnership strategy. Strong local partnerships offer portfolio diversification, local market knowledge, and an asset light structure in addition to economies of scale and new strong revenue streams. Significant progress and strong trust from our clients have registered in mature and very competitive markets such as the United States. Recent renewals of flagship contracts in Ohio, Arkansas and Vermont secure our operational profitability and income visibility for the next 10 years, developing the US market into our biggest EBITDA contributor. The company’s ability to renew in a competitive market such as the US, on top of its historical renewal track record, creates fresh confidence for the extension of all contracts maturing in the next year.  A recent filing for eligibility to float our shares in the Italian Stock Exchange by our local joint venture, Gamenet, also creates the prospects to capture and monetize the value of a key company asset.”

o  The main factors that drove top line performance per region are:

€+39.9m in Europe primarily due to increased sales in Bulgaria (mainly due to Eurobet’s consolidation after July 2016) and Poland, following the recent regulatory changes.

€+29.8m in North and South America, with the increase driven by Jamaican’s top line performance (improved performance of its Numerical games portfolio and the introduction of horse racing following the acquisition of the Caymanas Track), the improved performance in Argentina (Numerical and Sports Betting alike), and the start of INTRALOT’s new contract in Chile which fully counterbalanced the top line deficit from our US operations as a result of last year’s record high Powerball jackpot in 1Q16 and the sale of multi-play self-service lottery terminals in Ohio in 2Q16.

€+26.6m stemming from all other regions primarily driven by Azerbaijan’s strong performance and the sale of a software license right in Australia which fully offset the sales gap from Turkey (vs. last year)

o  On a quarterly basis, revenues increased by 10.1% compared to 2Q16, leading to total revenues for the three month period starting in April 1st, 2017, and ending in June 30th, 2017, of €365.3m. Increased revenues for the quarter are primarily attributed to increased sales in Azerbaijan, Jamaica, Poland and the sale of a software license in Australia that fully offset the US operations deficit due to last year’s self-service lottery terminals sale in 2Q16. Eurobet consolidation after July 2016 fully balances the revenue shortfall of Eurofootball due to last year EURO effect.

o   Lottery Games remain the largest contributors to our top line, comprising 43.4% of our revenues, followed by Sports Betting contributing 40.1% to Group turnover. Technology contracts accounted for 10.2% and VLTs represented 2.7% of Group turnover while Racing constituted the 3.6% of total revenues for the first half of 2017.

o  The Payout Ratio in 1H17 increased by 0.7pps vs. 1H16 (70.3% vs. 69.6%) primarily due to increased payout rates in Jamaica, Azerbaijan, and Poland in part offset by reduced payout rates in Bulgaria. At the same time, GGR from continuing operations increased by 7.0% (€363.5m) following the top line growth of our B2C contracts that fully balanced the augmented payout effect and the marginal sales deficit of our B2B/ B2G contracts (mainly last year’s Powerball Jackpot and equipment sale in Ohio). Adjusting for Eurobet and the Chilean contract, GGR increased by €10.9m (+3.2%). In 2Q17, the Payout Ratio marginally increased by 0.1pps compared to 2Q16, while GGR increased by 3.4% (€181.5) as a result of our B2C contracts performance which fully absorbed the B2B/ B2G contraction driven by the terminal sale in USA in 2Q16. Excluding Eurobet and the Chilean contract, GGR remained relatively stable compared to last year’s 2Q.

o  The Gross profit margin reached 17.3% in 1H17, compared to 18.7% in 1H16, negatively affected primarily by the top line contract type mix change (1H16 had larger B2B/B2G contribution, i.e. 26.8% vs. 22.5% in 1H17) compared to last year. In more detail, the Gross profit margin deficit is mainly driven by the payout uplift (-3.8pps both due to increased payout ratio and increasing B2C contract type contribution) in part offset by the containment of the other CoS items (+2.3pps) which are less sensitive to revenue uplift, and by the marginally contained tax and agent commission costs (+0.1pps). Overall, Gross Profit increased by 6.5% (€+7.8m) compared to the 1H16 levels. Adjusting for Eurobet and the Chilean contract, Gross Profitincreased by €2.7m (+2.3%).

o  EBITDA, from continuing operations, developed to €92.2m in 1H17, posting an increase of 3.6% (€+3.2m) compared to the 1H16 results. LTM EBITDA developed to €179.0m posting a 1.8% increase vs. FY2106. Adjusting for Eurobet and the Chilean contract, 1H17 EBITDA developed to €89.2m posting a slight increase vs. last year (€89.0m). The Group managed to fully absorb the excessive Powerball jackpot effect and equipment sale in Ohio in 1H16, supported also by the software license right sale in Australia in 2Q17.

o  On a yearly basis,EBITDA margin,from continuing operations, decreased to 12.6% compared to 14.0% in 1H16, as a result of the contract type mix change and last year’s Powerball and Ohio terminals sale effects. On a quarterly basis, EBITDA margin contracted by 0.9pps to 12.5% compared to 2Q16.

o   EBT in 1H17 totaled €26.6m compared to €20.3m in 1H16 positively affected by the significantly decreased finance expenses (lower by €6.9m compared to 1H16) as a result of the 2016 bond refinancing. In 2Q17 EBT decreased by 12.4%, from €9.7m in 2Q16 to €8.5m, adversely affected by a negative FX effect of outstanding balances translation despite the improved finance expenses.

o   Cash and cash equivalents at the end of the period decreased by €17.2m vs. FY16; as a result of the AMELCO investment (€-11.7m) and the Eurobet PP instalment payment (€-5.4m). Front loaded dividend distribution to minorities (€-27.5m) were fully absorbed by cash generated in the normal course of business and a €9.0m cash collateral released on early April.

o   At the end of June of 2017, INTRALOT extended the Ohio Lottery contract for another two years securing on top of that additional 2-year renewal options thus extending the contract term through June, 2027. The value of the 2-year contract extension granted is estimated at $71.0m. The extension of the contract also has provisions for the sale of 750 additional online vending machines, which will be delivered by the end of 2017, as well as the addition of cashless sales functionality to all vending terminals and retailer terminals in the field.

o   At the end of July INTRALOT S.A. announced the renewal of the current contract of INTRALOT Inc., a subsidiary of the INTRALOT Group in the United States, with the Vermont Lottery for the two-year period from July 1, 2018, through June 30, 2020, and consistent with its initial six-year contract with the option of exercising two two-year extensions, covering the period 2010-2020. The value of this two-year contract is estimated at approximately $ 5 million.

o   At the end of August of 2017, INTRALOT extended its current Arkansas Lottery contract for another seven years thus extending the contract term through 2026.

o   On August 29, 2017, Gamenet Group S.p.A. (“Gamenet”) filed with the Italian Stock Exchange (Borsa Italiana S.p.A.) a request for eligibility to list its shares on the Electronic Stock Exchange (Mercato Telematico Azionario) and, together with its shareholders TCP LUX Eurinvest S.à r.l. and INTRALOT Italian Investments B.V., filed with the National Capital Markets Commission  the request for approval of the registration document drafted pursuant to Article 113 of the Italian Legislative Decree no. 58 of February 24, 1998 and Article 52 of the rules adopted by Consob with resolution no. 11971 of May 14, 1999.INTRALOT Italian Investments B.Vis a subsidiary of INTRALOT S.A. and holds 20% of Gamenet.

o   Sales from Management contracts decreased by 8.1% mainly driven by the performance of Turkey, and Russia, with Morocco top line increase acting as a counterweight.

o   Revenues from HW sales and facilities management decreased marginally, by 0.9%, as the revenue contraction in our US operations due to last year’s record Powerball jackpot and the sale of multi-play self-service lottery terminals in Ohio in 1H16 was virtually counterbalanced by our new contract in Chile, the Argentinian, Netherlands and Australia monitoring contracts improved performance, the uptake of the new Peruvian contract (following the recent M&A activity), the higher revenues in Ireland due to equipment sale and the sale of a software license right in Australia. In addition, INTRALOT Australia reclassification from the prior characterization as “Licensed operations” to “Technology and support services” from 1Q17 onwards also supported in mitigating the USA sales gap vs. last year. 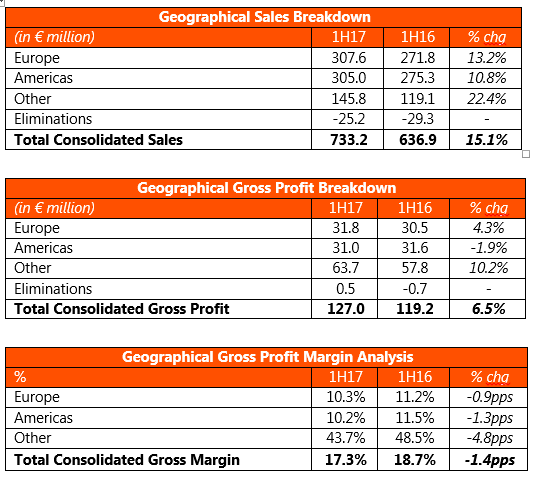 Revenues for the period decreased by 7.2% to €27.0m.The sales deficit is primarily driven by less intragroup merchandise and services sales which are in part offset by the pickup of our facilities management contract in Peru (following the recent M&A transaction) and the improved contributions of our contract in Kenya.

EBITDA decreased to €1.4m from €2.8m in 1H16. The EBITDA variance is mainly driven the net effect of the higher reversals of intragroup doubtful provisions in 1H16 as well as the higher intragroup impairments in the same period last year.

INTRALOT, a public listed company established in 1992, is a leading gaming solutions supplier and operator active in 55 regulated jurisdictions around the globe. With €1.32 billion turnover and a global workforce of approximately 5,300 employees (3,450 of which in subsidiaries and 1,850 in associates) in 2016, INTRALOT is an innovation – driven corporation focusing its product development on the customer experience. The company is uniquely positioned to offer to lottery and gaming organizations across geographies market-tested solutions and retail operational expertise. Through the use of a dynamic and omni-channel approach, INTRALOT offers an integrated portfolio of best-in-class gaming systems and product solutions & services addressing all gaming verticals (Lottery, Betting, Interactive, VLT). Players can enjoy a seamless and personalized experience through exciting games and premium content across multiple delivery channels, both retail and interactive. INTRALOT has been awarded with the prestigious WLA Responsible Gaming Framework Certification by the World Lottery Association (WLA) for its global lottery operations.