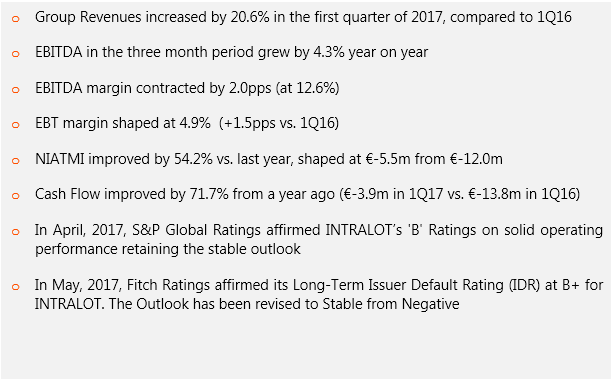 “Robust revenue growth and improved profits registered in 1Q2017 are driven by our strategic decisions to focus on key markets as well as products & services portfolio diversification. All the transformational initiatives undertaken over the last two years are depicted both at profit and cash-flow levels, considerably improved from a year ago. With a significantly improved financial structure and operational performance, we are also reaping the fruits of lower debt servicing costs and enhancing our credit grade outlook by rating agencies that boost our confidence going forward.”

o  Reported consolidated revenues increased by 20.6% compared to the first quarter of 2016, leading to total revenues for the three month period ending in March 31st, 2017, of €367.9m.

o  The main factors that drove top line performance per region are:

€+32.1m in Europe mainly due to increased sales in Bulgaria (in part due to Eurobet’s first time consolidation) and Poland

€+16.5m in North and South America, with the increase driven by Jamaican’s top line performance (improved performance of its Numerical games portfolio) and the start of INTRALOT’s new contract in Chile which fully counterbalanced the top line deficit from our US operations as a result of last year’s record high Powerball jackpot in 1Q16

€+14.3m stemming from all other regions primarily driven by Azerbaijan’s strong performance

Lottery Games are the largest contributors to our top line, comprising 44.6% of our revenues, followed by Sports Betting contributing 40.5% to Group turnover. Technology contracts accounted for 9.4% and VLTs represented 2.8% of Group turnover while Racing constituted the 2.7% of total revenues for the first quarter of 2017.

o  The Payout ratio in 1Q17 increased by 1.5pps vs. 1Q16 (70.1% vs. 68.6%) primarily due to increased payout rates in Jamaica, Bulgaria and Poland in part offset by reduced payout rates in Azerbaijan. At the same time, GGR from continuing operations increased by 10.8% (€17.7m) following the top line growth of our B2C contracts that fully balanced the augmented payout effect. Adjusting for Eurobet and the Chilean contract, GGR increased by €11.0m (6.7%)

o  The Gross profit margin wasshaped at 17.2% in 1Q17, compared to 19.3% in 1Q16, negatively affected primarily by the top line product mix change (1Q16 had larger B2B/B2G contribution) compared to last year. In more detail, the Gross profit margin deficit is mainly driven by the payout uplift (-4.4pps) and increased tax and agent commission costs (-0.7pps) in part offset by containment of the other CoS items (+3.0pps) which are less sensitive to revenue uplift. Overall, Gross Profit increased by 7.3% (€4.2m) compared to the 1Q16 levels. Adjusting for Eurobet and the Chilean contract, Gross Profit increased by €1.0m (1.7%)

o  Other operatingincome in 1Q17 totaled€4.2m compared to €6.3m in 1Q16; posting a decrease of 33.3%, mainly driven by a provision reversal related to a litigation case in Turkey in 1Q16.

o  On a yearly basis,EBITDA margin,from continuing operations, decreased to 12.6% compared to 14.6% in 1Q16, as a result of the product mix change and last year’s Powerball effect.

o   Operating Cash-flow posteda decrease in 1Q17 at €39.1m vs. €41.2m in 1Q16. On a pro-forma basis, i.e., excluding the operating cash-flow contribution of our Italian and Peruvian entities in 1Q16 (€7.0m), there is a significant improvement (€39.1m vs. €34.2m pro-forma) driven by the better EBITDA performance, the less taxes and the improved working capital vs. last year.

o   Cash and cash equivalents at the end of the period decreased by €3.9m vs. FY16; as a result of the AMELCO investment (€-11.7m), in part financed through debt (€+9.1m), the dividend distribution to minority interests (€-10.8m) in part offset by the cash generated from the normal course of business (€+9.5m). Q1 2017 cash position excludes a €9.0m cash collateral cancelled on 28th March with the actual cash release occurring on the 6thApril.

o   Revenues from Operation contracts (licenses) increased by 27.5% mainly due to higher revenues in Bulgaria, Azerbaijan, Jamaica, and Poland.

o   Sales from Management contracts slightly decreased by -1.7% mainly driven by the performance of Russia, with Morocco top line increase acting as a counterweight.

o   Revenues from HW sales and facilities management increased by 3.1% mainly due to INTRALOT’s new contract in Chile, the increased revenues in Argentina, the Netherlands as well as the positive effect of our contracts in Kenya and Peru following the recent M&A transaction; the effect was partially counterbalanced by a revenue contraction in our US operations as a result of last year’s record Powerball jackpot in 1Q16.

Revenues for the period increased by 1.4% to €14.1m.The sales uplift is primarily driven by the pickup of our facilities management contract in Peru (following the recent M&A transaction) and the improved contributions of our contract in Kenya.

EBITDA decreased to €0.9m from €2.6m in 1Q16. The EBITDA variance is mainly driven by higher reversals of intragroup doubtful provisions in 1Q16.

INTRALOT, a public listed company established in 1992, is a leading gaming solutions supplier and operator active in 55 regulated jurisdictions around the globe. With €1.32 billion turnover and a global workforce of approximately 5,300 employees (3,450 of which in subsidiaries and 1,850 in associates) in 2016, INTRALOT is an innovation – driven corporation focusing its product development on the customer experience. The company is uniquely positioned to offer to lottery and gaming organizations across geographies market-tested solutions and retail operational expertise. Through the use of a dynamic and omni-channel approach, INTRALOT offers an integrated portfolio of best-in-class gaming systems and product solutions & services addressing all gaming verticals (Lottery, Betting, Interactive, VLT). Players can enjoy a seamless and personalized experience through exciting games and premium content across multiple delivery channels, both retail and interactive. INTRALOT has been awarded with the prestigious WLA Responsible Gaming Framework Certification by the World Lottery Association (WLA) for its global lottery operations.